Many people are aware that Germany is one of the leading solar energy producers (and consumers) in the world. Now it seems that this might have something to do with the willingness of the German government to subsidize and encourage solar energy production on a scale far beyond anything we see in the United States. If that is the case, we might be able to take away some lessons from their success, and apply them here in the energy-hungry United States...

But not so fast! It turns out that the real reason for this success, according to FOX "News", is the copious amounts of sunshine received by Germany, far more than in dismal, cloudy places like, say, California.

It's all nonsense, of course. Completely wrong nonsense, completely at odds with the facts. But it's on FOX, and far, far too many people swear by FOX - and automatically believe anything they hear there.

Americablog: Fox News: Solar only works in Germany because it gets more sunlight than US

The hard truth: the amount of sunlight that shines on Germany is comparable to the amounts that shine on Alaska and Seattle. Even Pennsylvania has considerably more sunlight! It is true that solar panels operate more efficiently at lower temperatures, so a panel in a sunny but cool location will function more efficiently and produce more power than a panel in an equally sunny but much hotter location. But the success of solar power in Germany is due to government support. If some fraction of the  money given by the federal government to the fossil fuel industry were instead to be redirected towards the development, production, and installation of solar energy systems in the U.S., the results would be remarkable. Will we see this in our lifetimes?

Finding Solar Noon from the shadow of a stake

I'm currently taking a course in Solar Power, and one of the assignments was to determine solar noon by taking multiple measurements of the length of the shadow of a stake from a location between the hours of 10:00 AM and 2:00 PM. While the weather this winter has been unseasonably warm in Northeastern Pennsylvania, it hasn't been consistently sunny, and being able to find a sunny day when I was available to do this exercise was a bit of a trick. But today was the day: the sun was shining and my schedule was clear!

The first trick was to find an appropriate stake. After a few tests with a five-foot tomato stake that left shadows that extended into places where I couldn't measure, I settled on a plastic utility stake with a metal spike and a flat foot. As this stake was 38.5" tall after being planted, it wasn't too hard to find a location where its shadow could be conveniently measured.

The next trick was measuring the shadow. Having managed to misplace all of my tape measures, I had to use two yard sticks laid end to end in the path of the stake's shadow. The white yardsticks made the shadow more visible on the dormant grass of my lawn. But the grass itself presented a problem with getting precise measurements. I would have been better off laying down a flat platform - a sheet of plywood, perhaps - and measuring the shadows there. Because of my measuring difficulties, I decided to measure to the nearest half-inch.

Here's the graph of my measurements. (Right-click to see full-sized.) 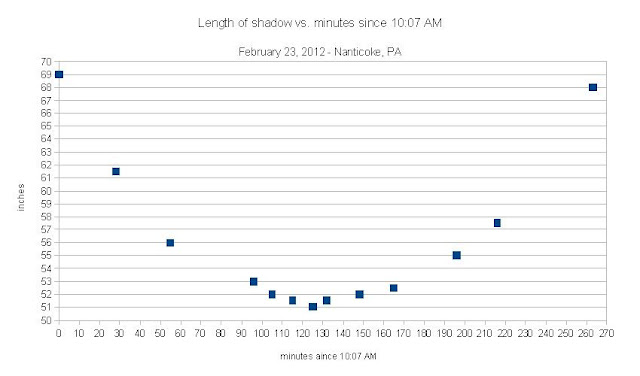 With the simple spreadsheet/graphing package I was using, I couldn't simply plot measurements against my irregular measurement times. I had to set this up as a "scatter plot", with the x-axis representing minutes elapsed from the start of the measurements.  The inelegance of the critical region - between 125 and 135 minutes from the start of observations at 10:07 AM - is probably the result of the crudeness of my measurements. In this region length was changing much more slightly over time, so more precise measurements would have been better. Still, this program calculated that solar noon for my location on this day was about 12:17 PM, which was 130 minutes from the start of observations - right in the range of 125-135!
Posted by D.B. Echo at 1:43 PM No comments:

Email ThisBlogThis!Share to TwitterShare to FacebookShare to Pinterest
Labels: Education

Harmony Beverage in Blakeslee on Route 940 is a great place to pick up cases of adult beverages and the freshest fresh-roasted peanuts. And now it's all powered by the sun!

From the linked article:

On an acre and a half behind harmony beverage, there are more than 360 solar panels, producing on average 450 kilowatt hours of power per day, even on cloudy days.

Among the cuts and changes: "Forbidding executive agencies to enter into contracts for green power in the next fiscal year. At the dawn of 2011, Pennsylvania was buying 50 percent of its energy from renewable sources, making our state a national leader in the development of the clean energy economy. This abrupt change sends a powerful signal to renewable energy companies that Pennsylvania’s leadership is not interested in renewable energy."

Read all about this disturbing change of direction here:

Faithful flock to Green Energy Fair in Scranton - The Times-Tribune

This would have been an interesting thing to learn about ahead of time. But I find the thing about Pennsylvania Interfaith Power & Light fascinating.

Faithful flock to Green Energy Fair in Scranton - News - The Times-Tribune
Posted by D.B. Echo at 9:14 PM No comments:

This is old news, but I just noticed one aspect of this install yesterday.

The International Brotherhood of Electrical Workers (I.B.E.W.) building off the Sans Souci Parkway in Hanover Township has been sporting a "beach umbrella"-style pole-mounted solar array for some time now. Casual observers might not realize that this array actually tracks the sun for maximum efficiency.

Being a good driver, I rarely take my eyes off the road in front of me, except to check my mirrors, my blind spots, and for traffic approaching from the sides. So it wasn't until yesterday that, thanks to an observant passenger in my car, I found out that the I.B.E.W. building itself is covered with solar panels. According to this article, this was part of the plan all along. I don't know if those panels have recently been added, or have been on the roof since the pole-mounted array went up. In either case, they're a great thing to see!

There hasn't been much news on the solar front in Northeastern Pennsylvania lately. But here's something from just south of here, in Lehigh Valley. Maybe Air Products will follow suit with its Hanover Township facility?

Even though this doesn't directly affect Northeastern Pennsylvania, this is big news. It isn't the first time Google has made an investment in solar power, but it is a very large investment.

Rather than trying to summarize this story, here is the story as reported by several different outlets:

An article on the current crisis facing the solar industry in Pennsylvania, and the uphill battle to make things right. The Corbett administration, which is very eager to embrace "alternative energy" from natural gas extraction, comes across as very reluctant to do anything to promote the expansion of solar.

Fight for solar power heats up The Times Leader, Wilkes-Barre, Scranton PA
Posted by D.B. Echo at 9:09 AM No comments:

This is the weekend of the Pocono 500, or as it's officially known this year, the "5-Hour Energy 500," and many NASCAR fans are catching their first glimpse of the massive 3 megawatt 25-acre solar farm installed at Pocono Raceway last August.

In August of 2010 the 3MW Pocono Solar Project came online after just 3 months of construction. Consisting of nearly 40,000 American made photovoltaic modules covering 25 acres, the Project will produce more than 72 million kilowatt hours (kWh) of energy over the next 20 years. The environmental attributes associated with the system will offset more than 3,100 Metric Tons of carbon dioxide annually, Carbon Dioxide emissions from 106,529 propane BBQ grills and it will generate enough power to provide the electricity needs for close to 1,000 homes beyond the power needs of the Raceway.

According to the article that appeared on nascar.com last year, this is the largest solar-powered sports facility in the world, more than twice as large as the runner-up, a 1.2 megawatt stadium in Taiwan.

The solar farm is just a part of Pocono Raceway's "Go Green" program - albeit a massively impressive part!

As with the Ikea news, this isn't something that directly involves those of us in Northeastern Pennsylvania - but it's something to look for the next time you visit Hershey's Chocolate World!

The results of PPL's latest SREC solicitation. Next solicitation will be in July, to purchase 24,000 SRECs for an eight-year period beginning in June 2012.

Northeastern Pennsylvania doesn't have any Ikea stores yet, but this is good news from any retailer. I have long hoped that Walmart, Lowes, or Home Depot would lead the way in retail solar installation, since they have enormous amounts of rooftop square footage and could synergistically sell solar panels to homeowners. But if Ikea is going to take the initiative, I'll be happy to keep my eye open for their installations the next time I'm near one of their stores!

Ikea A Rooftop Solar Juggernaut
Posted by D.B. Echo at 8:39 AM No comments:

Energy Savers from the U.S. Department of Energy